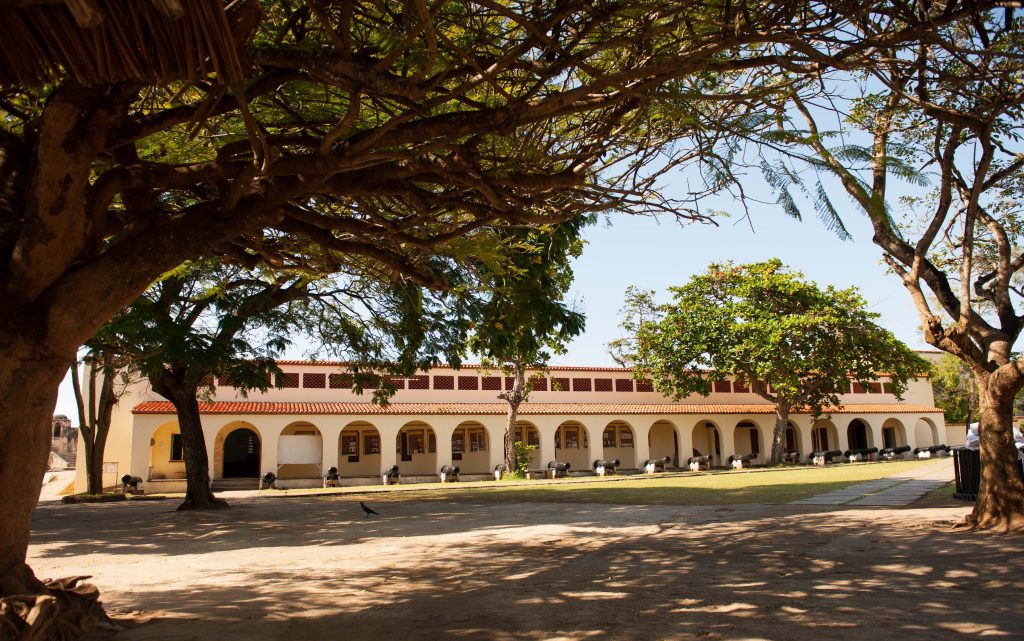 The Portuguese built Fort Jesus in 1593. The site chosen was a coral ridge at the entrance to the harbor. An Italian Architect and Engineer, Batista Cairato designed the Fort. The earliest known plan of the fort is in a manuscript atlas by Manuel Godinho de Heredia – dated 1610 that shows the original layout of the buildings inside the Fort.

The Portuguese regarded themselves as the representatives of the Christendom rather than of Portugal, and as a result, they sailed under the flag of the order of Christ, Jesus was therefore an obvious name for the new fort. Fort Jesus was built to secure the safety of Portuguese living on the East Coast of Africa. It has had a long history of hostilities of the interested parties that used to live in Mombasa. Perhaps no Fort in Africa has experienced such turbulence as Fort Jesus.

Omani Arabs attacked the fort from 1696 to 1698. The state of the fort can be understood from the plan of Rezende of 1636 and other plans by Don Alvaro Marquis of Cienfuegos and Jose Lopes de Sa – made during the brief reoccupation by the Portuguese in 1728 – 1729. In the Cienfuegos plan, the names of the bastions are changed. Between 1837 and 1895, the Fort was used as barracks for the soldiers. When the British protectorate was proclaimed on 1st July 1895, the Fort was converted into a prison. The huts were removed and cells were built.

On 24th October 1958, Fort Jesus was declared a National Park in the custody of the Trustees of the Kenya National Parks. Excavation was carried out and the fort became a Museum in 1962. The Fort Jesus Museum was built with a grant from the Gulbenkian Foundation. The exhibits consist of findings from archaeological excavations at Fort Jesus, Gede, Manda, Ungwana and other sites. Individuals notably; Mrs. J.C. White, Mr. C.E. Whitton and Mrs. W.S. Marchant donated other objects on display. In 2011, it was declared a World Heritage Site by UNESCO and highlighted as one of the most outstanding and well-preserved examples of 16th-century Portuguese military fortifications.
Fort Jesus has preserved the same basic shape as when it was built nearly 400 years ago. It bears physical witness, in its structures and subsequent transformations, also to the interchange of cultural values and influences between and among peoples of African, Arab, Turkish, Persian and European origin that fought to gain and maintain their control over this strategic port.

Currently, the Fort is also used to show case art exhibitions for upcoming artists enabling them to meet their prospective clients who tour the Fort. A sound and light show is organized weekly, which tells an animated story of the fort to both local and international tourists. The site is located in Mombasa Island which is in the coast of Kenya

Mombasa Butterfly House is a live butterfly exhibit that showcases a range of tropical butterflies. In the eco-tourism facility one can learn about the coastal biodiversity and its importance to the local communities, the lives and habits of butterflies, their economic and ecological importance and also enjoy its natural serene environment.