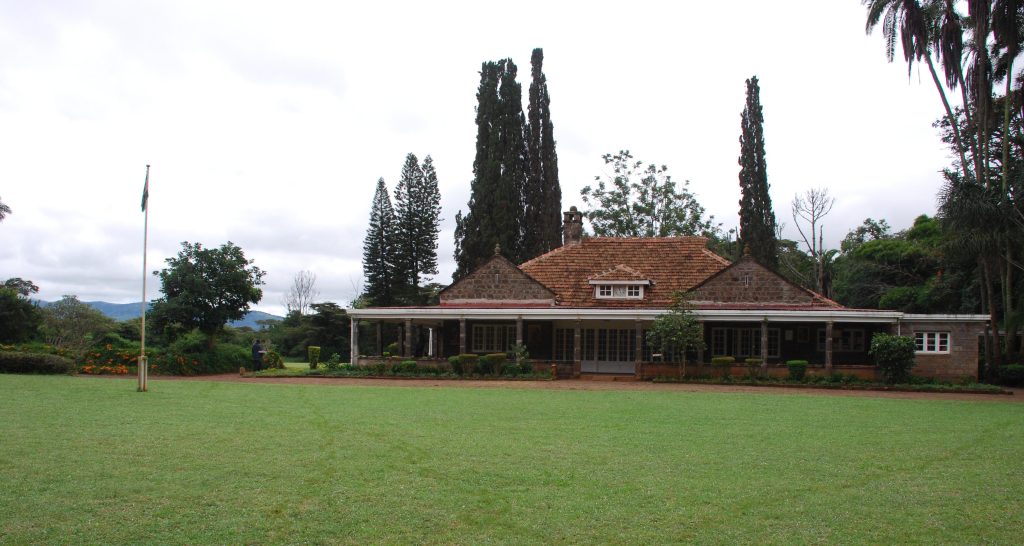 Set in the serene suburb of Nairobi, the Karen Blixen Museum not only provides the most comprehensive insight into the person of Karen Blixen, but also offers a fantastic space for personal reflection in our nature trail, against a back drop of Karen’s beloved Ngong Hills.

The Karen Blixen Museum was once the centre piece of a farm at the foot of the Ngong Hills owned by Danish Author Karen and her Swedish Husband, Baron Bror Blixen-Finecke. Located 10km from the city centre, the museum belongs to a different time period in the history of Kenya, and later gained international acclaim with the release of the movie ‘Out of Africa’, an Oscar winning film based on Karen’s autobiography by the same title.

Built in 1912 by Swedish Engineer Ake Sjogren, Karen and her husband bought the house in 1917 and it became the farm house for their 6,000-acre farm, of which 600 acres was used for coffee farming. Their marriage failed after eight years and in 1921 the Baron moved on and left the running of the farm to Karen.

Karen lived at the house until her return to Denmark in 1931. The farm was bought by Remy Martin, who broke the land into 20 acre parcels for sale. Subsequent development created the present suburb of Karen. Records indicate that a Lt. Col. G. Lloyd, an officer of the British Army bought the house in 1935 and lived there until his death in 1954, when it passed to his daughters, Mrs. G. Roberts and Lavender Llyod. A transfer of title to Mrs. J.P Robson and Mrs. L.B. Hyde is in City Hall records of 1956. The house was sporadically occupied until purchased in 1964 by the Danish government and given to the Kenyan government as an independence gift.

Subsequently, the government set up a college of nutrition and the house was used as the principal’s house. In 1985 the shooting of the movie based on Karen’s autobiography began and the National Museums of Kenya expressed interest to acquire the house for the purpose of establishing a Museum. The Museum was opened in 1986.

Karen, also known by her pen name Isak Dinesen was born at Rungstedlund in Denmark on 17th of April 1885 as the second child of Wilhelm and Ingeborg Dinesen’s five children. She came to Africa in 1914 to marry her half cousin and practice dairy farming in the then British Colony of Kenya. Her husband had however changed his mind and wanted to farm coffee. Her uncle Aage Westenholz financed the farm and members of both families were shareholders. The coffee farm did not do well, suffering various tragedies including factory fire and continuous bad harvest. After her divorce, Karen was left to run the financially troubled farm on her own, a daunting task for a woman of that generation.

She fell in love with an English man, Denis Finch Hatton, and his death in Tsavo in 1930 coupled with the failed farming left Karen little choice but to return to Denmark. She turned to writing as a career following her departure from Africa and published such works as Seven Gothic Tales (1934), Out of Africa (1937) and Babette Feat (1950). She died on her family estate, Rungsted, in 1962 at the age of 77. Karen Blixen called the house “Bogani” or “Mbogani” meaning a house in the woods, and occupied it until 1931.
By1985, with renewed interest in Karen Blixen occasioned by the film production of Out of Africa, an agreement was reached with the college for the house to become part of the National Museums of Kenya. Many pieces of furniture that Karen Blixen sold to Lady McMillan on her departure were acquired back and constitute part of the exhibition in the Museum.

The Museum house remains a serene environment that seems to belong to the past, surrounded by a tranquil garden and indigenous forest, with a splendid view of Karen’s beloved Ngong Hills. She honors the hills with the phrase ‘I had a farm in Africa at the foot of the Ngong Hills’. Farm tools including a tractor from that period, wagons, ploughs and an original coffee processing factory equipment form part of this rich collection, as outdoors exhibits.

The well maintained luscious green gardens offer the best setting for all outdoor events include weddings and wedding receptions, corporate galas and team building. In line with Karen’s passion for art, we support local and upcoming artists at the Karen’s Art Corner. Guided tours are offered continuously throughout the day by our well trained multilingual guides.

A museum shop offers a wide selection of souvenirs including handicrafts, posters and postcards, the Movie ‘Out of Africa’, books and other mementos. Children and school groups are not left out as the Museum offers curriculum centered education programs and tailored art activities.

Our nature trail offers sneak peeks at tree hyraxes and is a haven for birdwatchers, with plenty of birds living here. Our trees are labeled to help in identification and learning. The Karen Blixen Museum has received various awards for excellence of service and is rated highly by Trip Advisor. The Museum is easily accessible by both public and private transport.