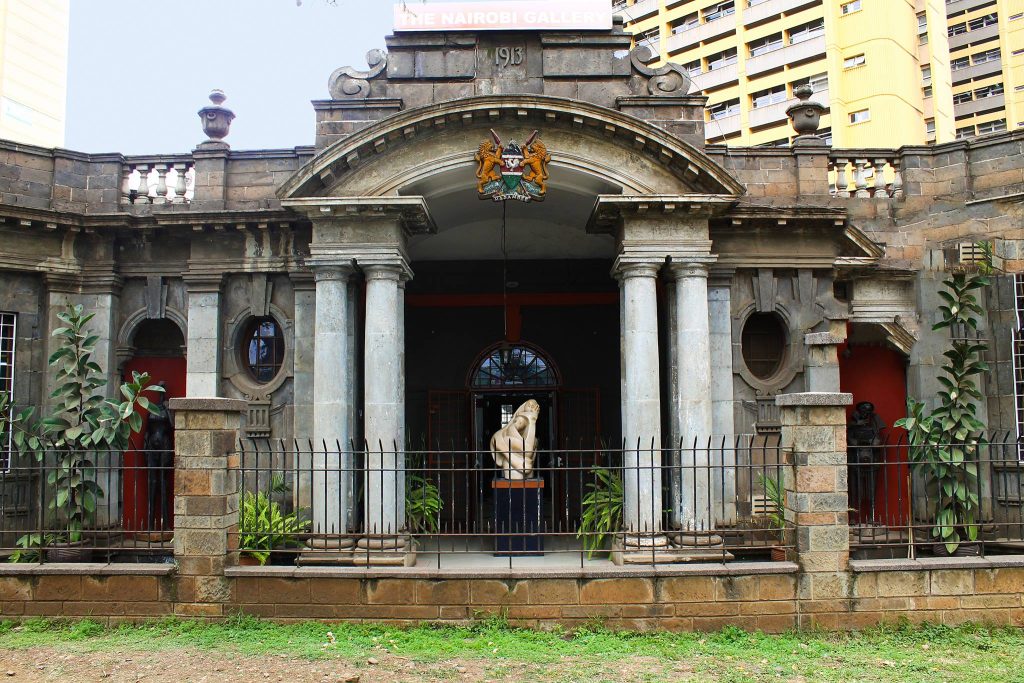 The Nairobi Gallery is located at Kenyatta Avenue and Uhuru Highway roundabout next to Nyayo house. The building is situated at Kenya’s point zero from where distances to all corners of the country and subsequently to the continent and the world were measured from. Further, the building is part of an original master plan of government buildings around what is now Kenyatta Avenue.
The building is in many ways connected to the history and development of Nairobi and its people. Built in 1913 to house the Native Ministry, this building was fondly referred to by the settler community as ‘Hatches, Matches and Dispatches’ because of the births, marriages and deaths that were recorded here. Before independence, the building was a colonial courthouse where natives accused of entering Nairobi without a pass were tried and sentenced.
After independence, the house was used by the provincial commissioner as the Nairobi province office until 1983 when they relocated to Nyayo house. Later KANU (Kenya African National Union) the ruling party by then used the building as its KANU Nairobi branch office until 1999.

Because of its historical significance the Old P.C.’s building was gazetted by the Kenya government on 22/10/93 Gazette Notice 5257 and confirmed on 19/04/95 Gazette Notice 2016. The building was then handed over to the National Museums of Kenya for preservation purposes in 1977. It opened its doors to the public in November 2005 when it hosted its first temporary exhibition “Dreaming in Pictures” by JakKatarikawe.

Today the Gallery has become the home of Joseph and Sheila Murumbi’s collections. Joseph Murumbi was Kenya’s second vice president. Nairobi Gallery is also dedicated to promoting local artists through displaying of their artwork. The key attractions include:

Architectural Design:
The Nairobi Gallery is an example of Victorian architecture, the exterior of the building is decorated with columns, niches, friezes and pediments of natural stone. The original entrance leads from the roundabout into an octagonal dome hall (point zero) covered with a beautiful dome. The surrounding rooms extend from the central space and are divided into two wings, the walls have a smooth line plaster finish, windows and doors of teak wood, some ceilings have patterns.

Point Zero:
Original entrance of the building leads to point zero location from where all the distances to all corners of the country were measured from. (The black spot at the Centre is the point zero.)

Colonial Safes:
The Nairobi Gallery has two old safes that were used by the colonial government and have never been opened since they left.

The Murumbi African Heritage Collections:
Joseph and Sheila Murumbi were Africa’s greatest private collectors of artifacts, art pieces, books, jewelry, postal stamps, textiles and furniture which are today on display at the Nairobi Gallery. Their mission was to preserve, protect and promote African culture in all its form. The Murumbi African heritage collection exhibition at the Nairobi Gallery has been displayed in different galleries with different storylines; collection of books, textiles and costumes, jewellery, African artifacts, the Murumbi home and finally the pan African postage stamp collection said to be next to the queen of England in importance. (Pictured above: Joseph Murumbi. Below: Some of the collections in display)

Pioneer Art Gallery:
The National Museums of Kenya endeavors to promote artists through the display of their artwork and an art space within this building has been dedicated to this cause. Temporary Art exhibitions by both pioneer and upcoming artists from within and out of Kenya are held after every three months in this space. Photos of some of the pioneer African artists who started their art career in 1960’s despite all the odds are also on display. Some of these artists are Magdalene Odondo, ExpenditoMwembeKibula, ElkanaOngesa, Jack Katarikawe, Richard Onyango, John Ondochameny, Francis Nnaggenda, Sanaa Gateja, Accent Soi, Geraldine Roberts, NaniCroze, and Yony Waite.