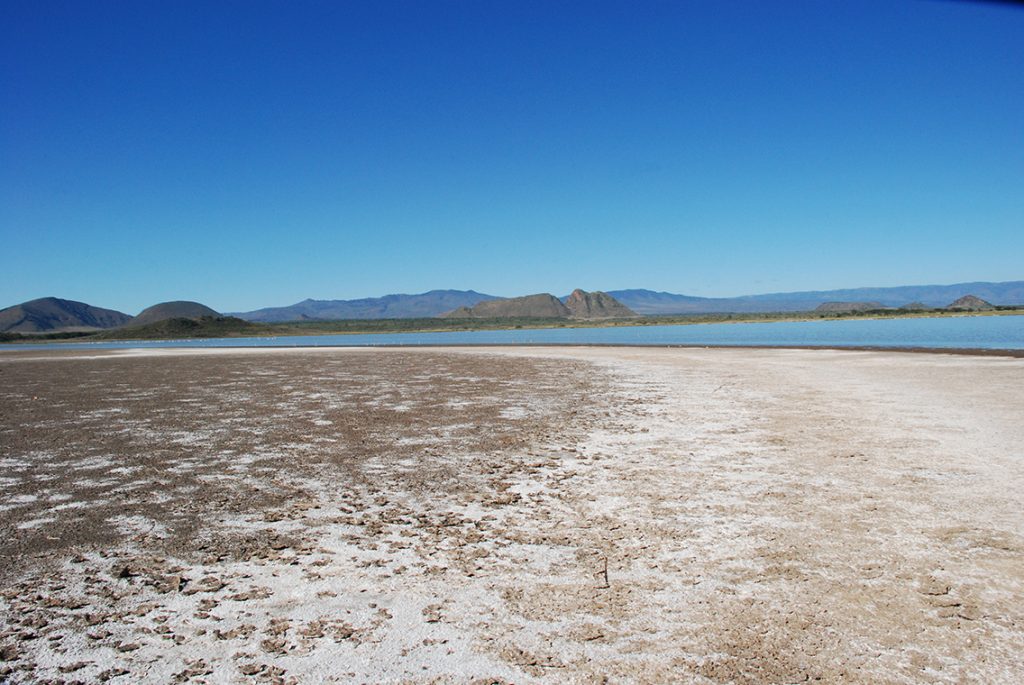 They collectively cover a total area of 32,034 hectares. The property is home to 13 globally threatened bird species and some of the highest bird diversities in the world. It is the single most important foraging site for the lesser flamingo anywhere, and a major nesting and breeding ground for great white pelicans.
The property features sizeable mammal populations, including black rhino, Rothschild’s giraffe, greater kudu, lion, cheetah and wild dogs. The treasured area is also valuable for the study of ecological processes of major importance.

Outstanding Universal Value
The three alkaline lakes and their surrounding territories are located in an area where major tectonic and/or volcanic events have shaped a distinctive landscape. Some of the world’s greatest diversities and concentrations of bird species are recorded within these relatively small lake systems. For most of the year, up to 4 million lesser Flamingos move between the three shallow lakes in an outstanding wildlife spectacle. Surrounded by hot springs, geysers and the steep escarpment of the Rift Valley with its volcanic outcrops, the natural setting of the lakes provides an exceptional experience of nature.

The Kenya Lake System presents an exceptional range of geological and biological processes of exceptional natural beauty, including falls, geysers, hot springs, open waters and marshes, forests and open grasslands concentrated in a relatively small area and set among the landscape backdrop of the Great Rift Valley.

The massed congregations of birds on the shores of the lakes including up to 4 million Lesser Flamingos which move between the three lakes is an outstanding wildlife spectacle. The natural setting of all three lakes surrounded by the steep escarpment of the Rift Valley and associated volcanic features provides an exceptional experience of nature.

The lakes manifest ongoing ecological and biological processes which provide valuable insights into the evolution and the development of soda lake ecosystems and the related communities of plants and animals. Low species diversity and abundant resident populations of birds and other animals make the soda lakes of the property especially important environments in which to conduct investigations of trophic dynamics and ecosystem processes.

The production of huge biomass quantities in these distinctive soda lakes and the food web that this green algae supports are also of international scientific value, provide critical support to birds which visit the property in large numbers as part of their migration in response to seasonal and episodic changes in the environment.
The lakes are also the single most important foraging site for the Lesser Flamingo in the world with about 1.5 million individuals. These species migrate from one lake to the other and provides the main nesting and breeding grounds for Great White Pelicans in the Great Rift Valley. The lakes’ terrestrial zones also contain important populations of many mammal and bird species that are globally or regionally threatened. They are home to over 100 species of migratory birds and support globally important populations. The property makes a critical contribution to the conservation of the natural values within the Great Rift Valley, as an integral part of the most important route of the African-Eurasian flyway system where billions of birds are found to travel from northern breeding grounds to African wintering places.