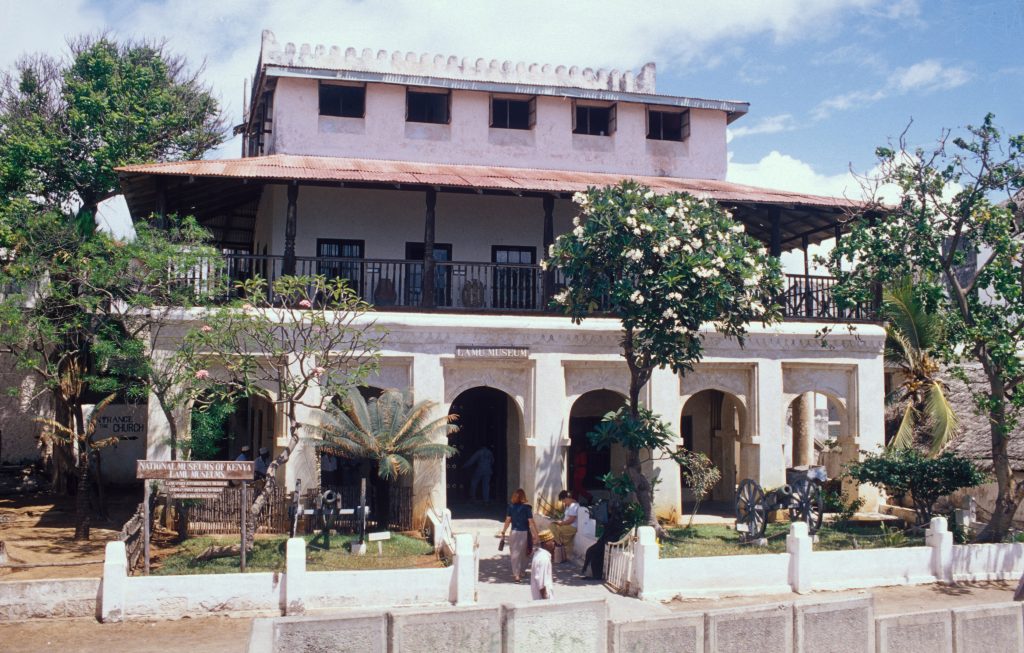 Lamu Museums refers to the five thematic Museums located within the Lamu Old Town on Lamu Island in the Northern Coast archipelago of Lamu. The attractions of the Old Town a World Heritage Site and one of the most beautiful & serene locations on the African continent include the Lamu Museum, Lamu Fort, German Post Office, Swahili House and the Takwa Ruins and Mwana Arafa Jambeni.

The Lamu Museum building
The Lamu Museum is the flagship of the five museums and resource centers in Lamu Old Town. The Lamu Museum established in the 1960s constitutes one of the largest and most authentic Swahili ethnographic collections on the East African coast assembled from numerous researchers and enthusiasts from the early 1900s. The artefacts represent different facets of Swahili cultural heritage and include items of clothing, jewellery, furniture, manuscripts, amulets, musical instruments, maritime and dhow materials, archaeological finds, among a wide array of household and technical tools and implements.

These artefacts have been collected from the numerous traditional Swahili settlements within the Lamu archipelago and collectively represent the identity of the northern Swahili cultural landscape of Eastern Africa. Locals from within the archipelago are regular visitors to the museum and are able to accurately and using authentic illustrations from the collections give a narration of their cultural heritage to their children. The artefacts are also an important reference for the numerous scholars and researchers studying the cultural heritage of the Lamu archipelago.

The ground floor (GF) is dedicated to an exhibition of the artworks of the famous Swahili poet cum-wood carver Mohammed Kijumwa. The GF also accommodates the Swahili – Lamu door gallery showcasing a number of rare antique and highly prized curved timber doors .The archeology gallery also is accommodated here .

The first floor houses the ethnographic collections from the Swahili, Boni, Sanye, Pokomo and Orma communities. This floor displays one of the finest African treasures in Swahili governance the Pate Ivory Siwa. The Maulidi and maritime galleries are also housed on this floor.

The Lamu Museum is housed in one of the most authentic Grade 1 classified Stone Veranda Buildings. Built in the early 1900s it is denoted as a perfect example of the radical departure from the traditional vernacular Swahili stone houses of 19th Century to a new architectural style influenced by the European and Indian merchants who began to settle in the town during this period.

The property was originally owned by Mr Abdallah Bin Hemed Said Al Busaidy a close confidant to the then sultan of Zanzibar. The building was left to a noble family after Bin Hemed moved to Mombasa and later on was used by the Imperial British East Africa Company before serving as the official residence of the Senior British Colonial Administrator. In post-independence Kenya the building served as the District Commissioners residence until 1968.

Today the Lamu Museum is the focal point of information on ethnographic material in the Lamu World Heritage Site. The ethnographic collections (in exhibition and storage) are an invaluable asset that illuminates the cultural history of the northern Swahili landscape and glows out the rich biography of the cultural influences by foreigners to Lamu.

It is undoubtedly a great monument within the world heritage site housing an invaluable collection of ethnographic materials from in and around the Lamu archipelago that is treasured by many scholars from all over the world who come to visit Lamu for research or otherwise.

Mwana Arafa Jambeni – Lamu American Corner
Mwana Arafa Jambeni building formerly known as the “Daktari wa Ng’ombe” is located along the seafront promenade of the Old Town. It sits on an almost rectangular plot having a sea frontage of approximately 20 meters leading 35metres inland to the main street (usitawamui) and borders the donkey sanctuary to the south. The building lies within the conservation zone of Lamu town.
The property is divided into two important elements; the sea front half is given over to a walled garden and on the rear half stands a magnificent 19th Century Style residence. The building is classified as a Grade 1 Veranda building and is a perfect example of the morphology from the traditional Swahili stone houses to the European and Indian influenced architectural style of the early 20th Century.

The house was originally single storey Swahili dwelling built in early 19th century and it is believed the house was extended to second storey later in the middle of that century. Also reports of two architectural surveys conducted in 1975 and 1985 are indicative that many additions were made to the building to accommodate new functions when the building was in use by the ministry of livestock development

The house has an entrance from the “Usitawa Mui” main street which conforms with the traditional entrance of a “Daka” porch. The “Daka” adds to the streetscape of the town. The house has a second entrance from “UsitawaPwani” seafront promenade through the arcade under the veranda.
The building also has a covered passage (wikio) on the southern facade, a unique feature of the town in itself.

Historical Significance
Originally the house was built as a nucleus family house by Mwana Esha Ahmed (Mwana Arafa Jambeni) a lady of noble decent. The house was sold to government during Colonial era and used by town Magistrate and later by the District livestock officer. The ground floor was until the early 80s used as offices for the district veterinary services and the first floor as residence of the District livestock officer. Under the tenure of the district livestock department the building was known as the veterinary building or the Daktari Wa Ng’ombe house. It was then used as a gas distribution depot before the unfortunate explosion in 1987 that ripped through the building leading to its partial collapse.

The building was acquired by the National Museums of Kenya in 1999 and restored to its current state creating accommodation for a number of community functions.
Today the Mwana Arafa Jambeni building houses the Lamu Museum’s information centre host of the Lamu American Corner (https://ke.usembassy.gov/american-corner-lamu-promotes-american-reference-center-resources/) American Corner Lamu promotes EducationUSA and eLibraryUSA in Lamu to over 150 participants including librarians, teachers, American Corner members, students and youth.

The Lamu Museums Library was founded in 1978 as a reference library for staff and researchers and was initially housed at the Lamu Museums building. However, in order to accommodate the growing number of users and polite requests from the Lamu residents to extend the library services to the community and the general public at large, the library was in 1986 relocated to a more specious room at the then recently rehabilitated Lamu Fort.

Lamu Fort Library is a research-cum-community library and serves a population of about 80,000 people. It plays the role of a public library in Lamu County, since it is the only library open to the general public in Lamu County.

The library is a member of Kenya Library Association and has participated in Maktaba Awards competition since 2010. In 2011 Lamu Fort library was rewarded 2nd runner-up in public libraries categories and third runner up in community library in 2018.

The library is also a participating partner in the Elimu Asilia program (organized by Goethe Institute) and collects Indigenous Knowledge on Swahili Culture.